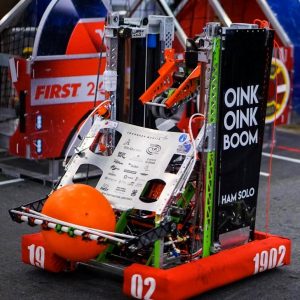 Ham Solo is Exploding Bacon’s 14th robot, built to play the 2019 FIRST Robotics Competition Game “DESTINATION: DEEP SPACE”. Built to specialize at scoring in the cargo ship and all three levels of the rocket, Ham Solo utilizes an elevator lift and unique touch-and-go intake system. With a high gear speed of 14 fps and low gear pushing power, Ham Solo can compete offensively and defensively to maximize effectiveness for the alliance. Using vision tracking, Ham Solo can autonomously align to the target. This season Ham Solo, competed at the Palmetto Regional, Orlando Regional, and the FIRST Championship in Houston in the Newton Division.